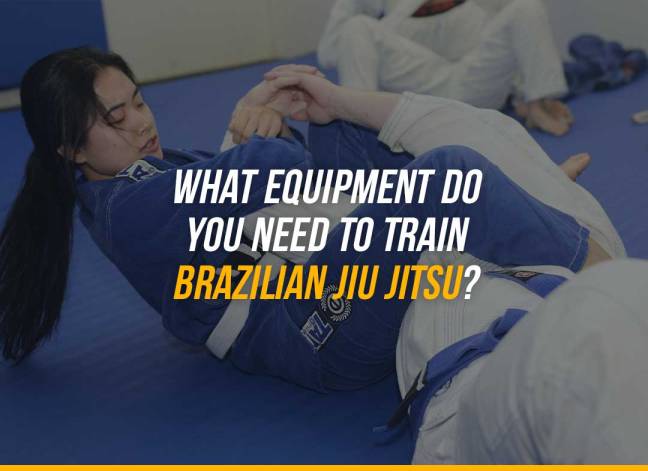 Unless you’ve been under a rock since the first UFC competition then you’ve seen BJJ shoot from a niche sport to a global phenomenon. There’s BJJ gyms in basically every major city, competitions are aired on streaming services like UFC fight pass and acai sales are through the roof. If you’re considering taking up BJJ, but aren’t sure what kit you’re going to need to buy, then keep reading because we’ve broken it all down for you.

When you’re first starting out in BJJ there’s a few bits of kit that you’ll need to get hold of, depending on what kind of BJJ you’re planning on doing.

A gi is the traditional uniform worn in BJJ and an essential part of training. At a basic level a gi teaches you to control your opponent, and avoid being controlled, using clothing. Whilst you can just focus on no-gi grappling most people chose to do a mixture of the two, and a good gi is therefore essential.

Whilst optional most people chose to wear a rash guard underneath their gi, it helps when you get ridiculously sweaty during training and helps prevent friction, avoiding scrapes and bruises, during training sessions. If you’re doing no-gi you’ll just wear a rashguard instead of the gi

Spats are the equivalent to a rashguard but for your legs. In no-gi you typically wear them instead of gi trousers, and some people chose to wear them underneath gi trousers too – it really comes down to personal preference.

The final thing you need when you’re training gi BJJ is the appropriate belt to mark your rank – if you’re just starting out you need a white belt, and a lot of gi’s include a free belt when you order them.

As you’d expect a mouthguard protects your teeth. They come in a variety of forms, from mould at home, boil and bite mouthguards to fully custom dental moulded ones. We’d recommend starting out with the a boil and bite, but as your training gets more serious you might want to invest in a custom mouthguard.

Like a mouthguard but for your most important parts, a lot of people aren’t too worried about using a groin guard in BJJ, but if you want to keep yourself safe from accidental impacts then it’s worth getting hold of one.

Finally, there’s a few optional extras that you might want to consider getting if you’re training hard

Cauliflower ear is real, and unless you want to get it a set of ear protectors will protect you from the friction and impact that leads to it – invest early and thank us when you can still put earphones in in a few years time.

Another thing that can make training easier is a set of wrestling style knee pads. It’s pretty common to be scraping your knees against the matts and with a few hours of training they can get pretty battered. A pair of knee pads can make all the difference.

Have we missed anything off the list? Let us know below in the comments. Oss!